I have long been fascinated by the ability of some folks to take incredibly detailed super close shots. One of the first things I wanted to do when I got my first camera was take macro photos, like REALLY close up macro photos, never really got it figured out in my film days though.

Took me awhile to sorta get it figured out in the digital age... IF I really have. You see, one of the most interesting things about learning about photography is that the more you learn the more you realize what you do not know and that you want to learn how to do.

Keep in mind that I am not a bug chaser like the photographer linked above, I just don't have the patience for that. I like setting up a tripod and using light in my studio. I like to have a lot of control, control is hard to come by in nature where the slightest breeze can move what you are shooting at completely out of focus without the slightest warning.

Anywhoo, what I wanted to do in this little blog post is look at one technical aspect of macro, the lens. There are multiple true macro lenses out there, the good ones are usually fairly expensive. So the beginning photographer tends to look for cheap options, the first is usually a screw on lens that adds magnification to your standard lens. These have varying quality levels depending on what you spend and the cheap ones are just not worth messing with.

The beginners with a little more money to spend will often buy a lens that says "Macro" on the side. These can be standard zooms, my beloved Sigma 17-70 was mine it got reasonably close enough for flowers and such, but at it's best the image was only approximately 1/3 the size of what it was in real life when it was projected on the camera sensor. They can also be Zoom lenses, many 50mm-200mm and 70mm-300mm will say macro on the side but only magnify to half life size at best, and are not all that sharp at times.

Other options include examples you will see below, dedicated macro lenses that can focus close enough to reproduce the object at life size on the sensor (Known as 1:1 magnification) Reversing Rings (This link will take you to my Amazon Affiliate Store) and Extension Tubes (These are really hard to find!). I have all three of these and can combine them in multiple ways.

The first shot here is taken with my Pentax DFA 100mm f2.8 WR Macro lens. It is auto focus, weather sealed and a stellar lens for macro and portraits too. It is, however, not cheap, though it is less expensive now then when I bought mine. This shot is to give you an idea of the size of the object I will be magnifying. This gear from my lawnmower is approximately the size of a silver dollar. (1 and 9/16th inches) I stopped the lens down to f22 to increase the depth of field (more on this later) I also did not clone out the dust on my sensor... sigh... 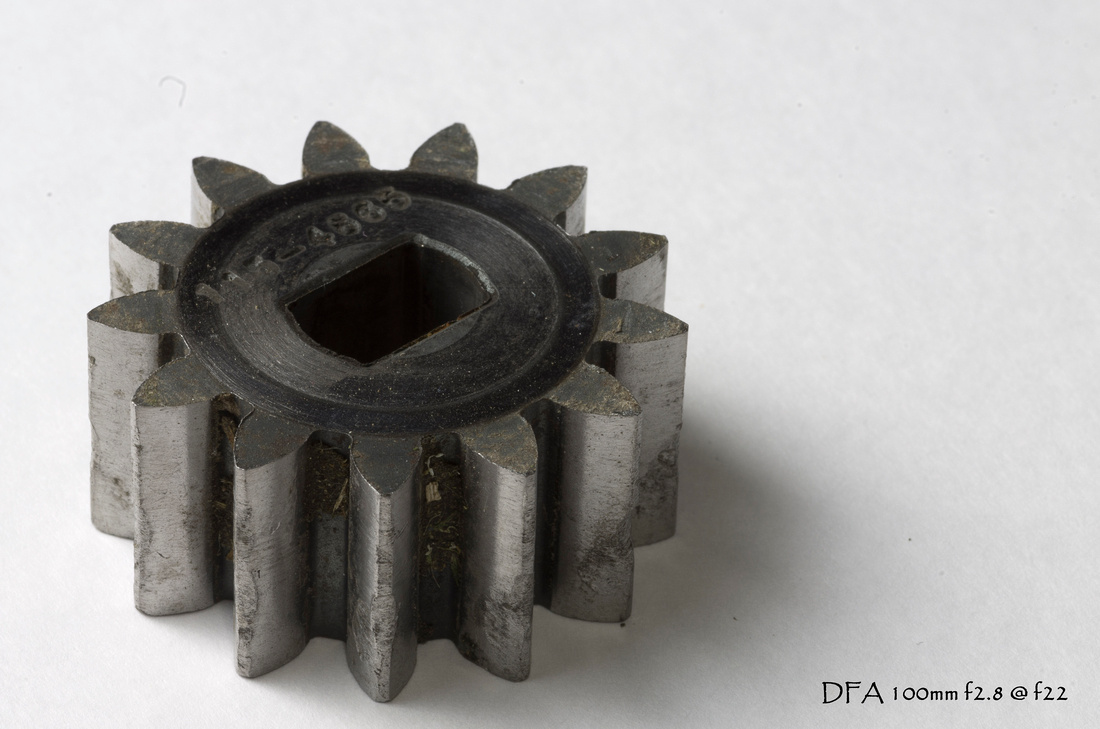 I then manually turned the focus ring to the closest focusing distance and turned off the AF on my camera. This is an important detail to remember, in macro you are moving the camera and/or the object to correctly focus the image usually Auto Focus is useless in these situations.

I now had to move the camera closer to the gear until the gear was in focus. Many dedicated Macro photographers use macro rails, that have gears and can move the camera at the turn of a knob. I am not one of them, which makes it harder but hardly impossible. You can spend huge amounts of money on this stuff! This photo shows the gear at the maximum magnification the lens is capable of 1:1 meaning that the image on the sensor is the same size as the object is in real life. 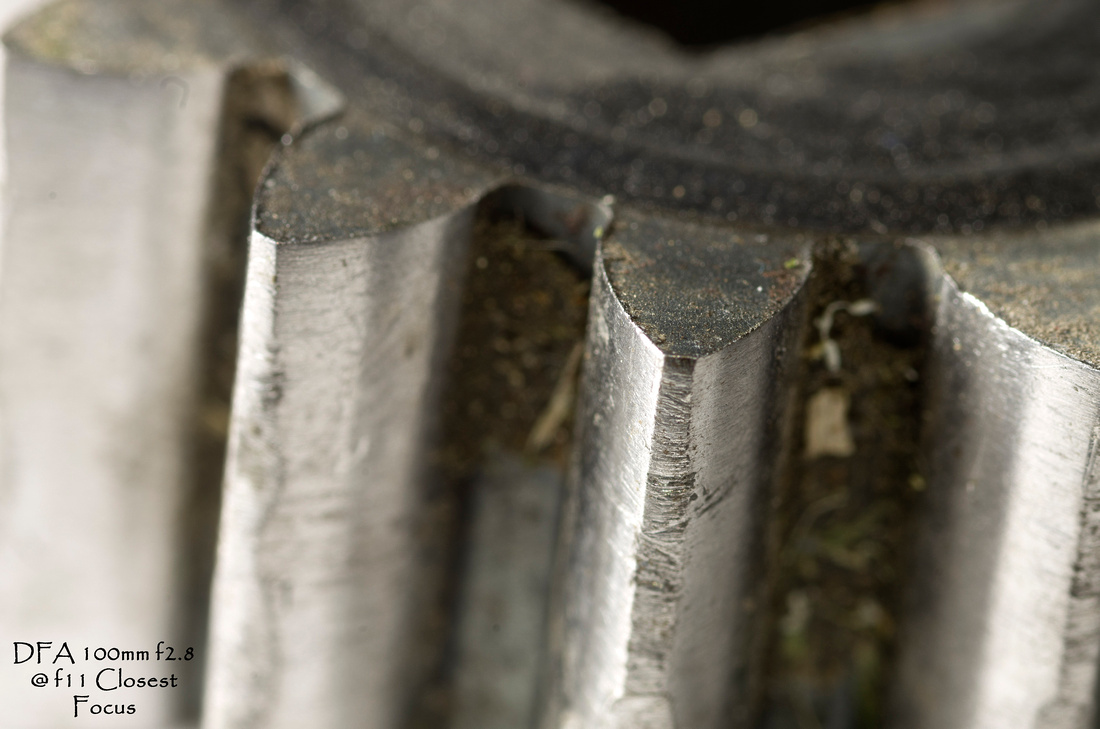 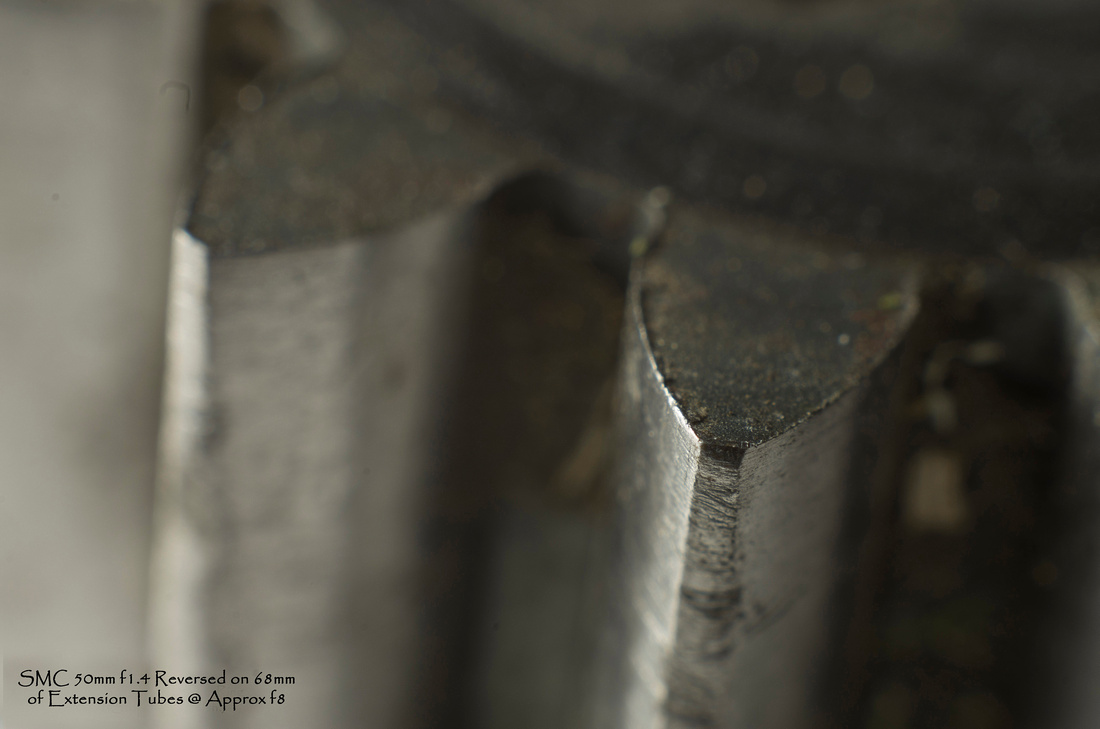 But that wasn't enough for me, like the good american I am, I want more. Through past experience I knew that a shorter focal length lens reversed would give me more magnification, so I tried my 24mm f2.8 of a similar vintage. On the extension tubes I simply did not have enough light to see to focus. Even the 50mm with it's larger aperture is tough. I could see NOTHING through the viewfinder with the 24 on. Removing the Extension Tubes but keeping the lens on the reversing ring made it possible to move the gear into the plane of focus but it was tough. That gear is approximately 3/16 of an inch wide at the widest point. That was as close as I could get. It was also a quite long exposure to get enough light, which is a huge limitation in macro photography, getting enough magnification and enough light and enough depth of field. 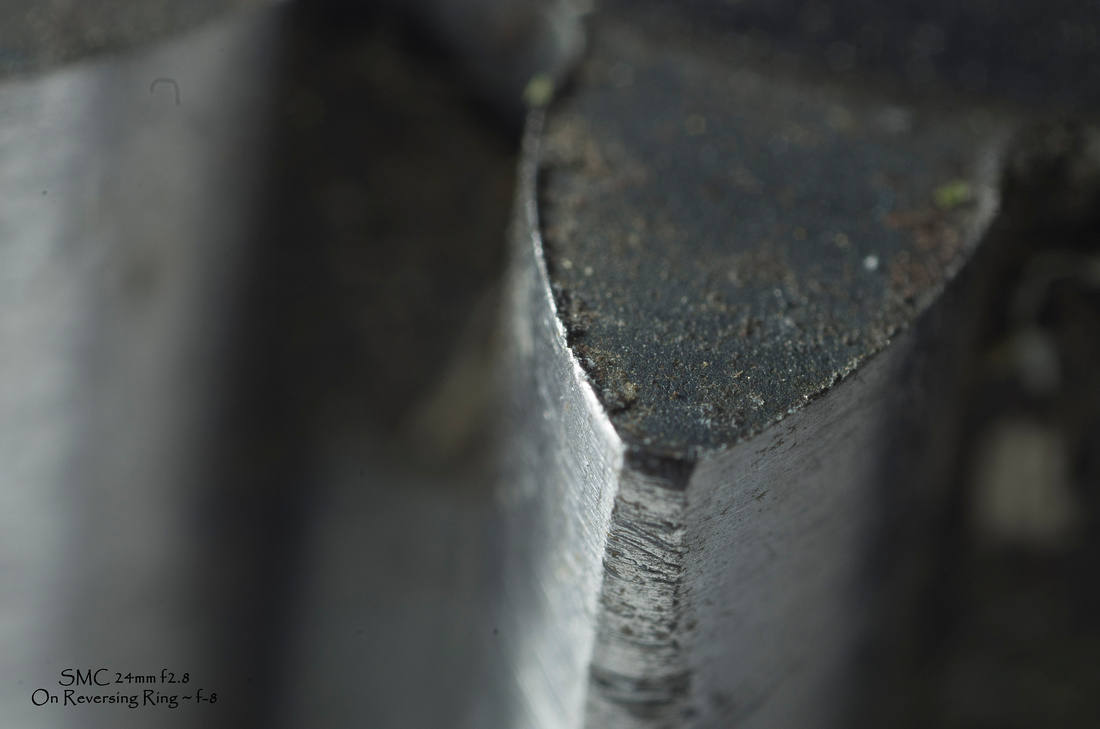 Reversing the 50mm without the extension tubes give me this which is probably 1:2 or half life size. 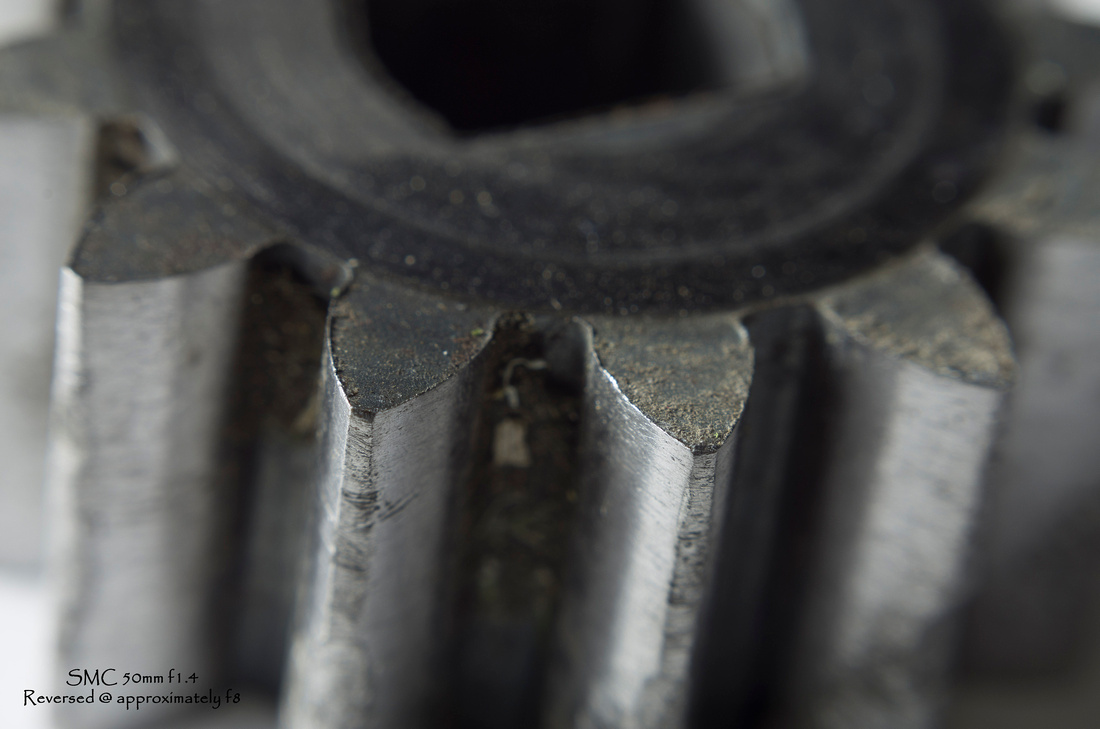 So... I can get close, big deal. Yeah, but this allows me to get really close to cool things. Like this, one of my favorite things. A US Silver Dollar from 1884. 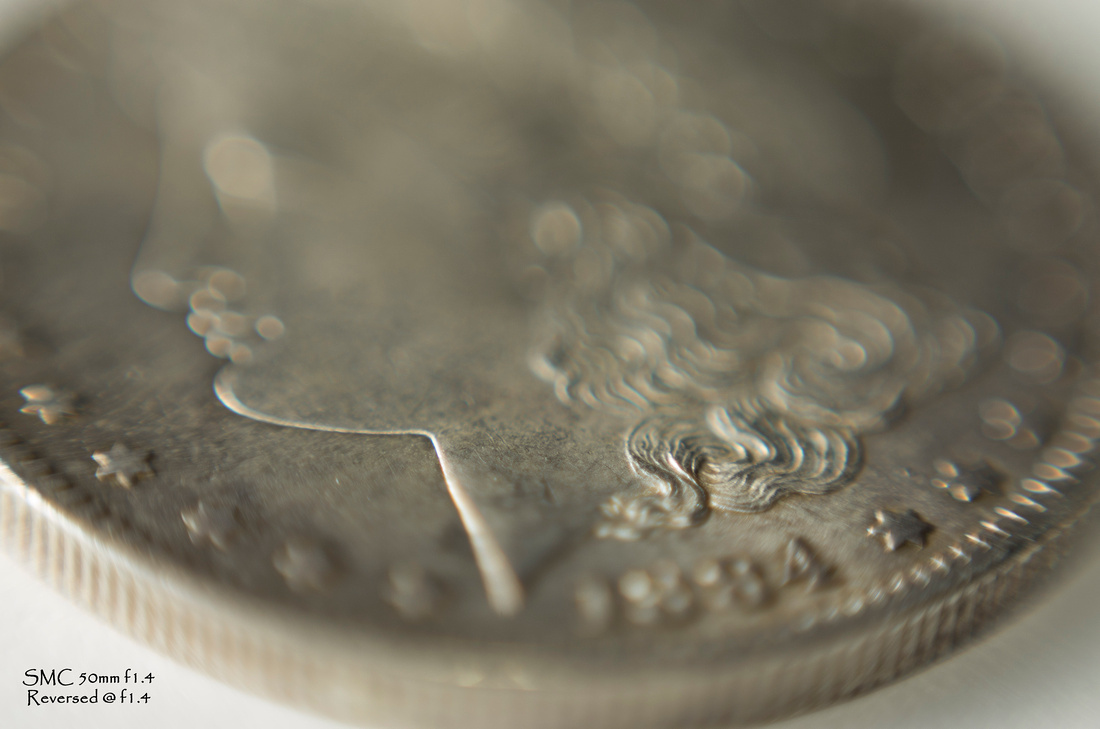 Notice the difference between this photo and the next? Yeah, making the aperture of the lens larger like above makes for less of the image being in focus, but allows for more light. The top photo had the shutter open for 1/8 of a second. The photo below was a 4 second exposure, more of it is in focus but not all of it. There are limits to how much you can get in focus at that close of focus. 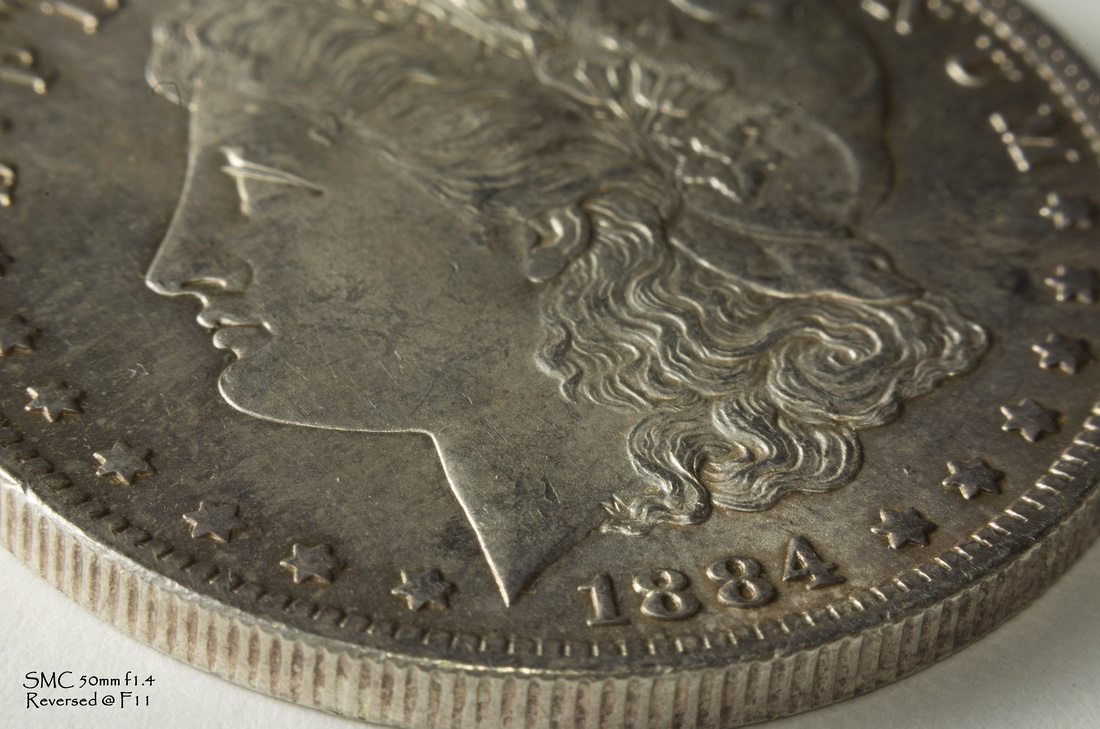 Replacing the 50 with my 24mm gives me MUCH closer focus, but again at the cost of depth of field. 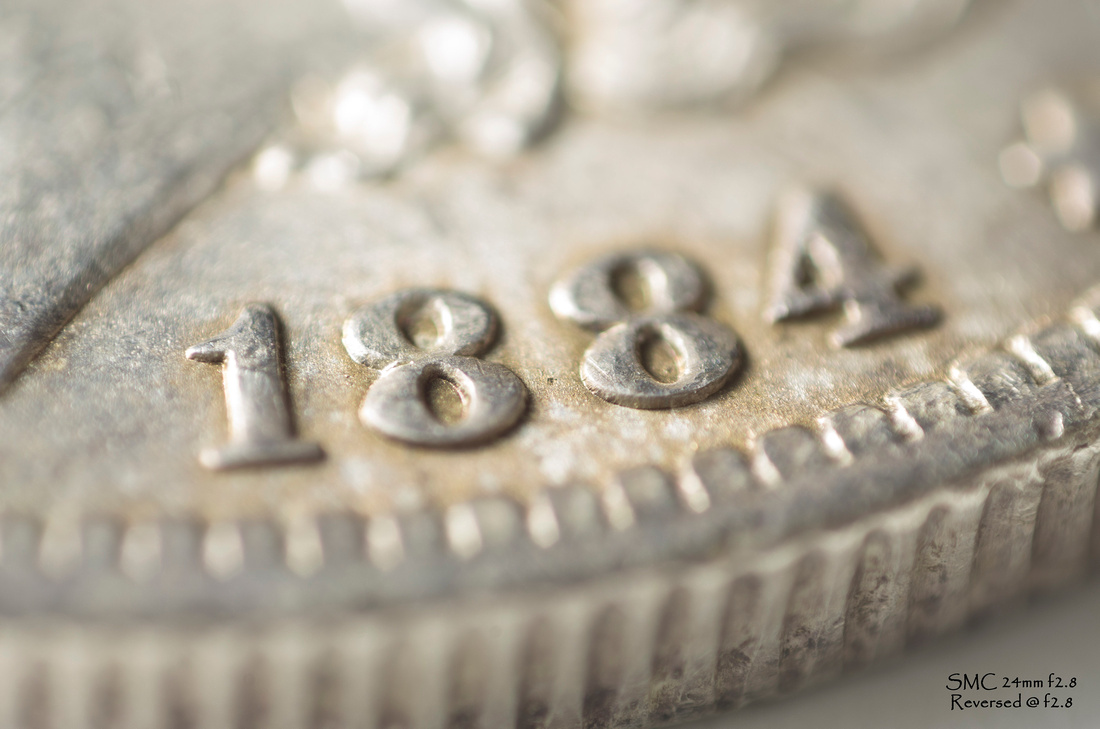 Stopping down again helps but with a longer exposure. 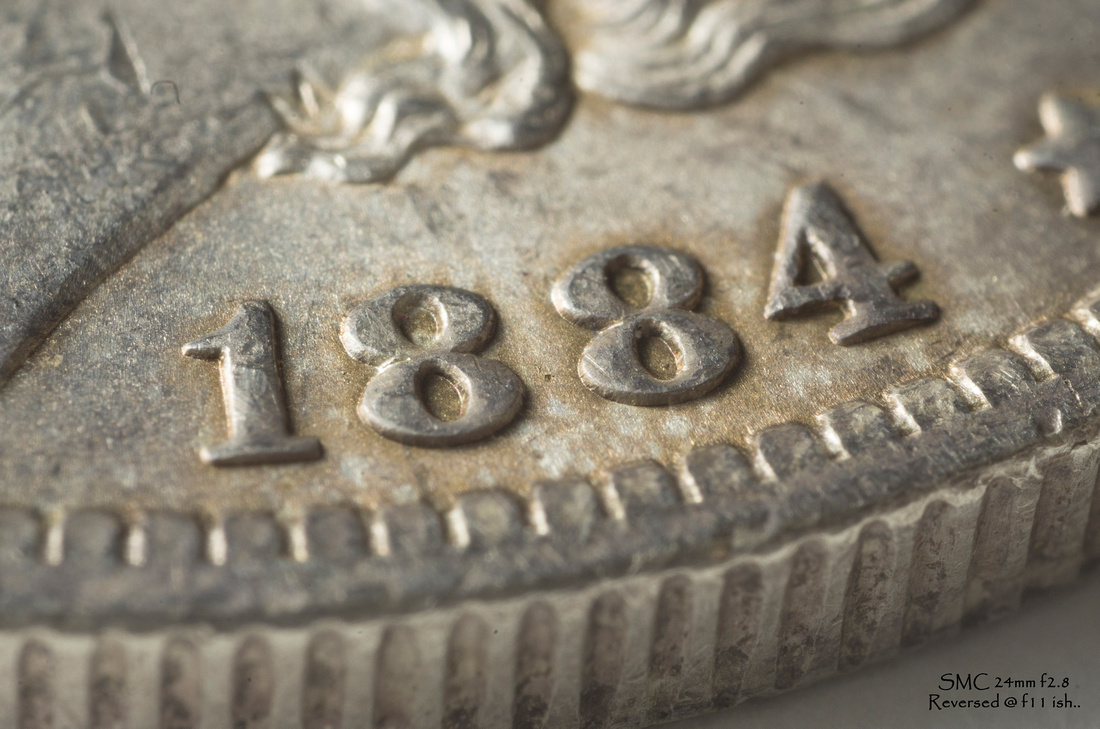 There are techniques for increasing Depth of Field, like those we have tried, stopping the lens down to very small apertures (larger f numbers) but eventually you cannot make the aperture any smaller and you still don't have everything in focus. That is where software comes into play, there is a technique called "Focus Stacking" that makes for a pretty neat trick. Click here for a tutorial. He does a better job than I can. Here is my effort, with out of camera images and the final stacked image. 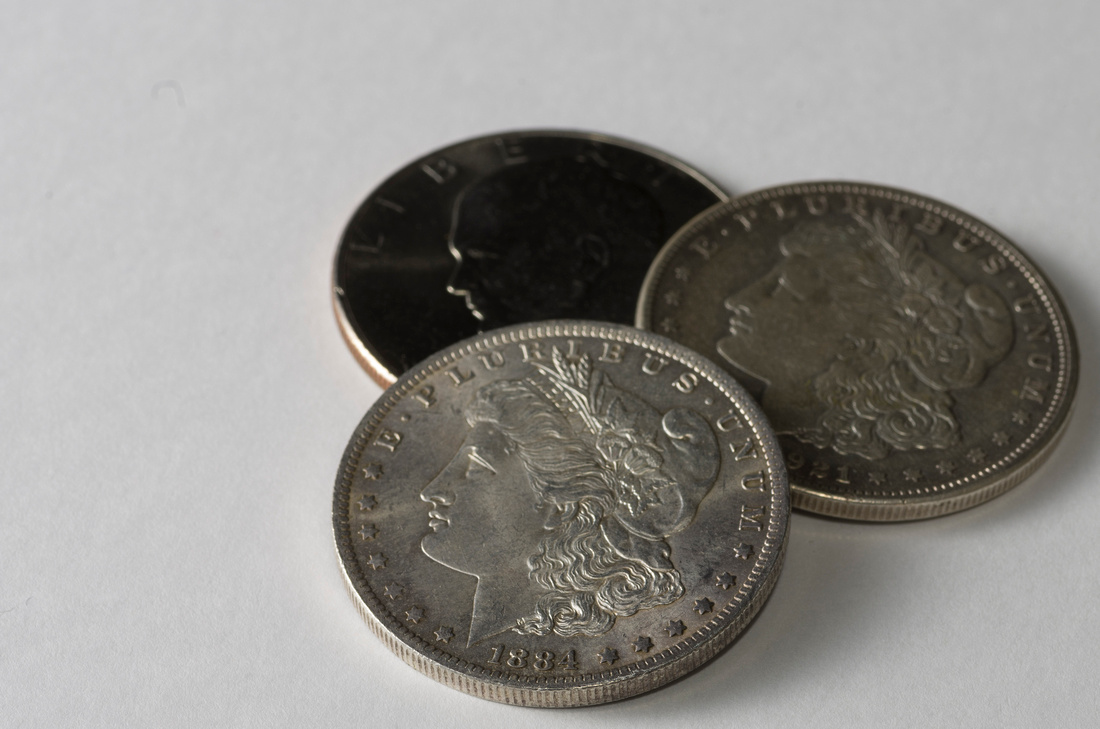 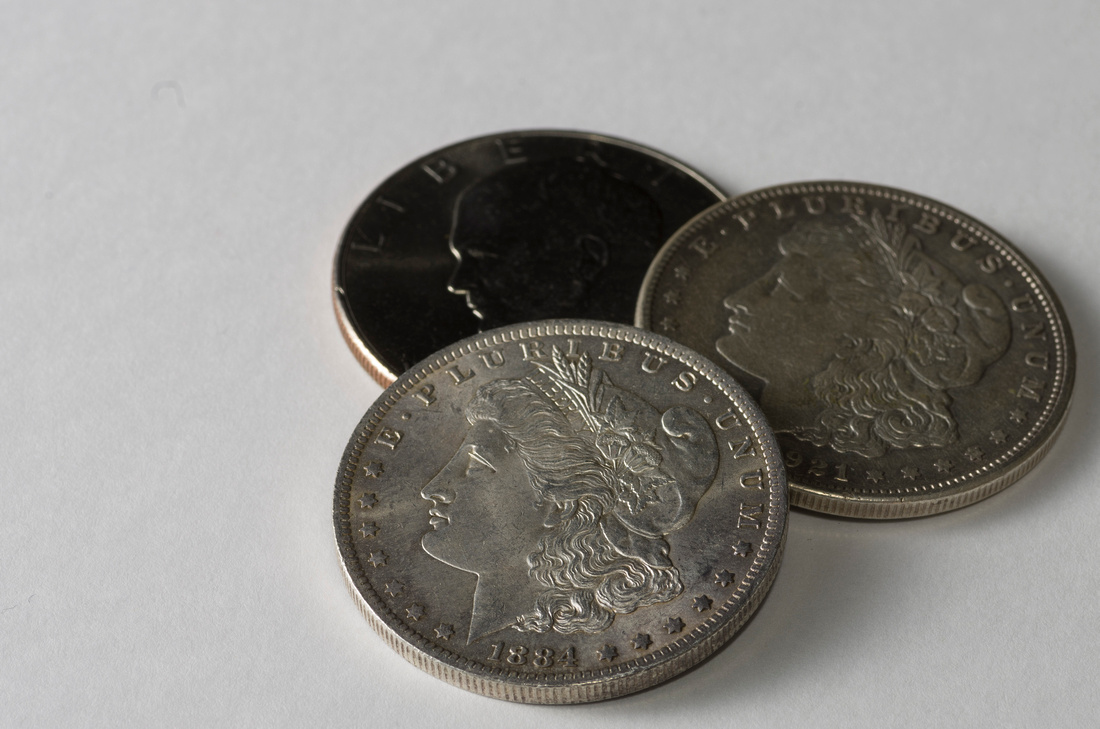 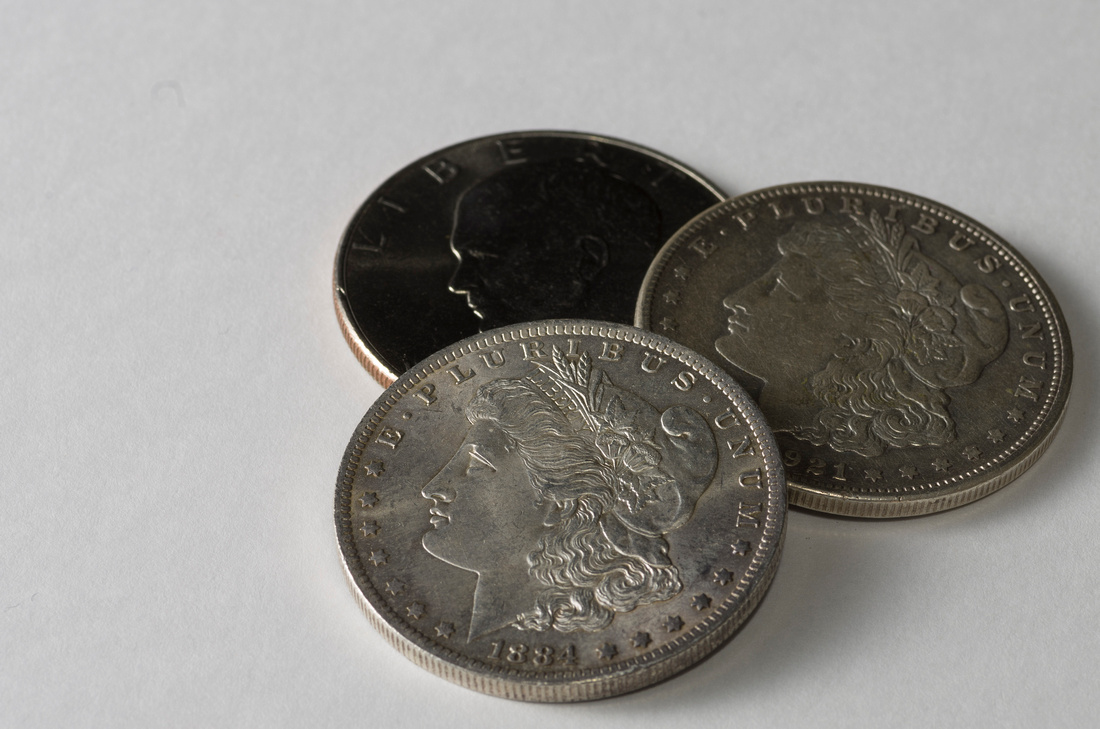 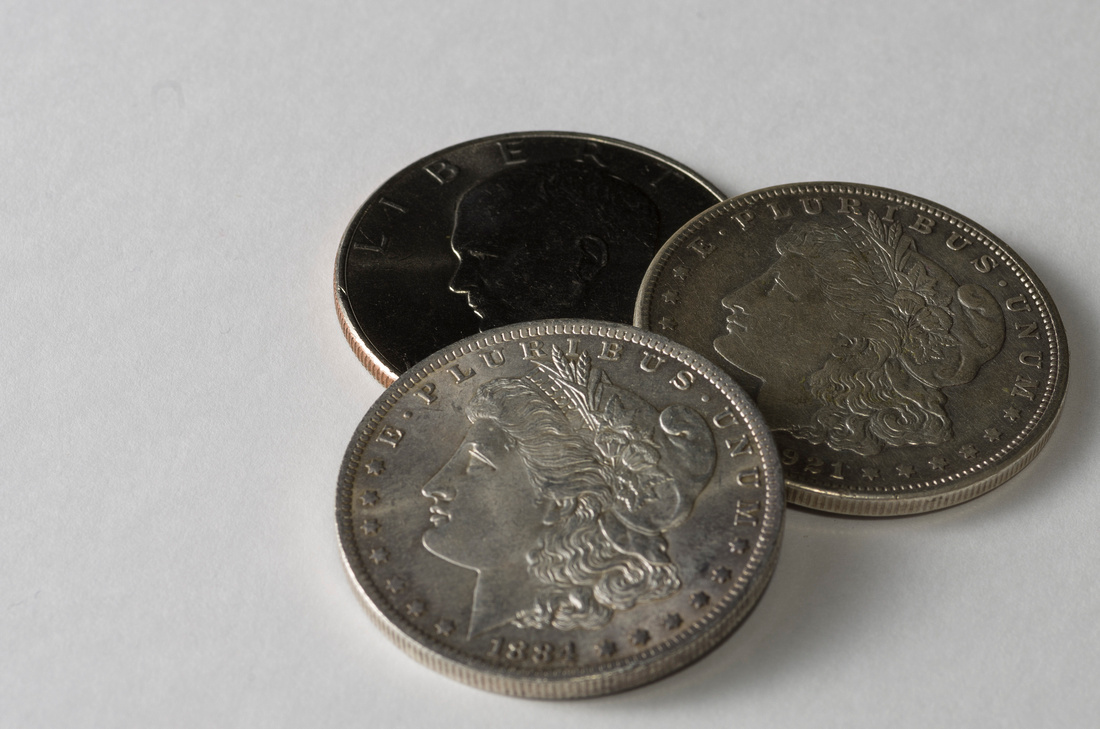 If you look closely each successive image shifts the focus further back in the image. This is the result, even at 100% view it is sharp all the way across the main coin! 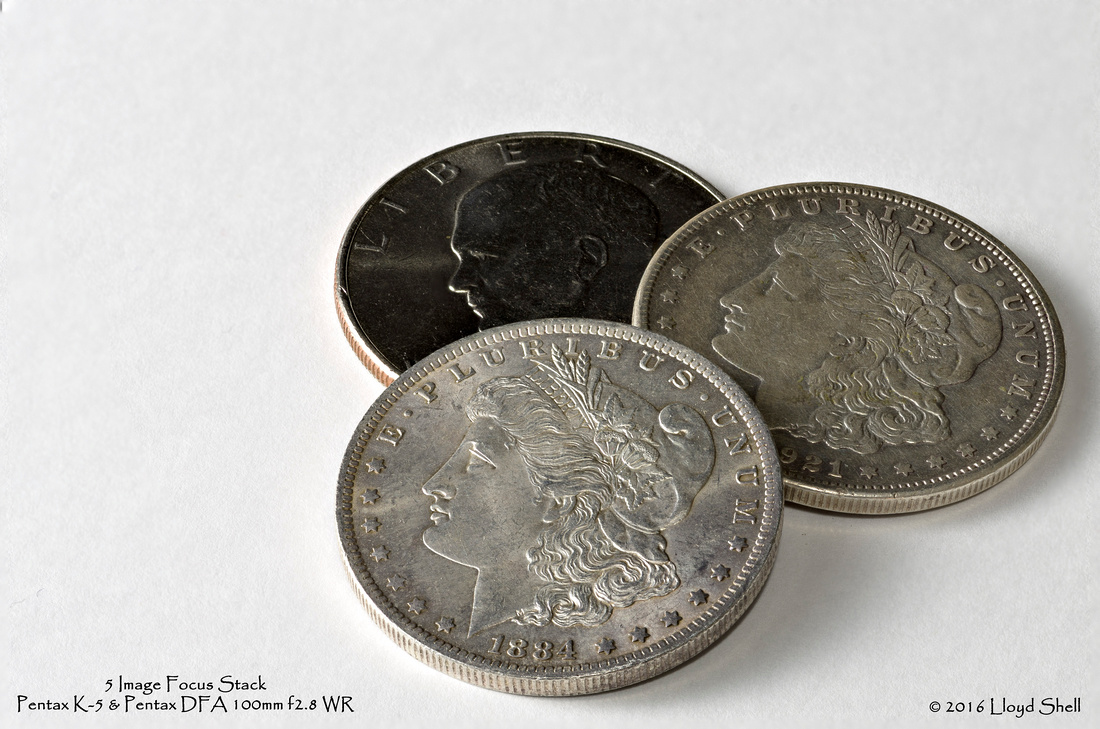 My last photo is a 3 image stack at a closer magnification. With a steady hand and a good tripod you can do amazing things! 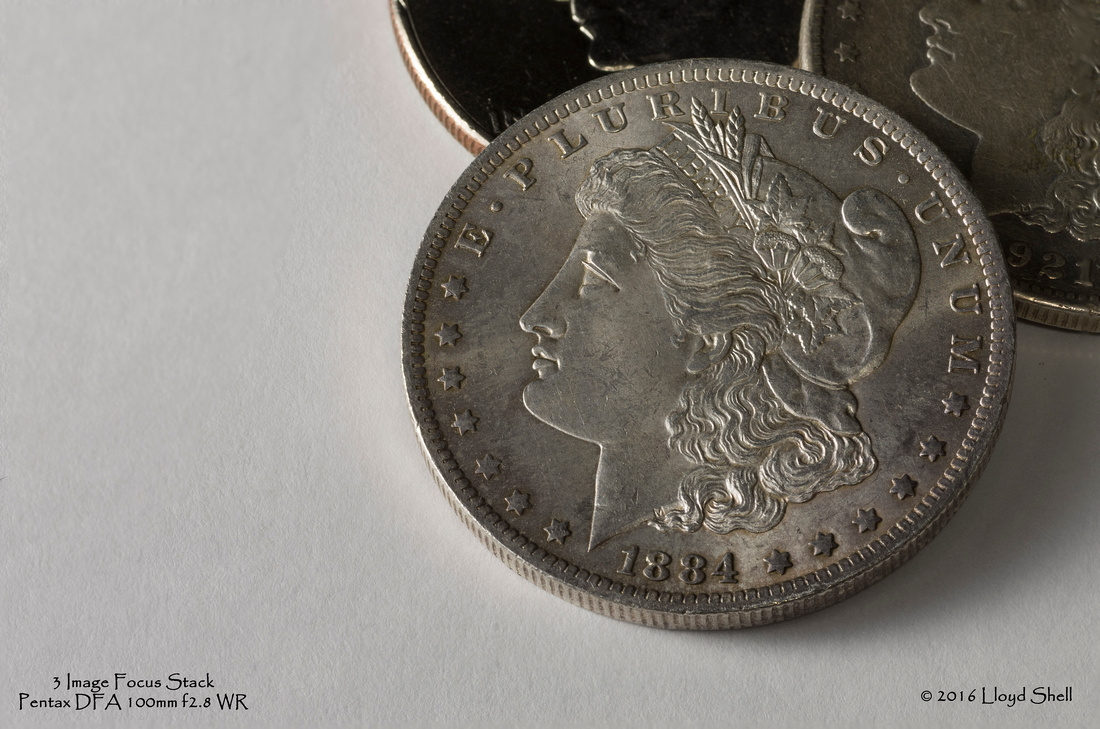 No comments posted.
Loading...
Subscribe
RSS
Recent Posts
Irregularly Irregular and Intermittent Steam on the Rails Taking a Chance to RUN AWAY!!!! Finally Ready to Render an Informed Opinion: Pentax DFA 150mm-450mm f4.5-5.6 ED DC AW Back to Basics: Prime Lens Wandering Shoot what is in front of you... Horseshoe Canyon: Getting Down to Business Deadmans Trail Canyonlands National Park: Getting there How to go Macro on a Budget... or not... Balloons in the Fall! Does it get any better?
Keywords
Pentax pentax 16-85 Macro Canyonlands National Park Deadmans Trail Horseshoe Canyon 16-85 LDS Temple Mormon Temple Oquirrh Mountain Temple
Archive
January February March April May June July August September October November December
COPYRIGHT: All photographs on this site are the property of Lloyd W. Shell.
Powered by ZENFOLIO User Agreement
Cancel
Continue